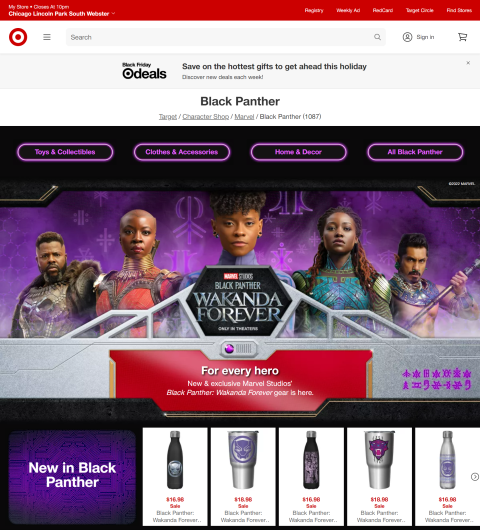 Target is tying into the theatrical release of Marvel Studios’ “Black Panther: Wakanda Forever” with a slew of support, including an AR experience, a video ad spot and exclusive product collaboration with Lego.

On Oct. 16, Target released the full custom, co-branded TV commercial (TVC) and ad spot after teasing a clip of it a week prior. It features actress Dominique Thorne, who plays character Riri Williams (or Ironheart) in the film. Target and Marvel had announced their efforts to promote the new film, which will be released on Nov. 11, at the end of September.

In the short, Thorne (as Williams) works on her armor suit while narrating the parallel journeys of two female creators who find inspiration at Target, as a representative for Target described it to the Path to Purchase Institute ahead of the release.

While Thorne fixes her suit, a young girl works on creating a model for a renewable energy source for a STEM project. The ad features Lego pieces as the girl’s STEM solution, helping her connect through storytelling extensions with “Black Panther: Wakanda Forever.” Meant to inspire the next generation of change-makers, the ad aims to promote themes of belonging, inclusion and inspiration, the rep said.

The ad also features more than a dozen “just for fans” moments that give glimpses of the Ironheart story, while the creative is scored by the Janelle Monae song, “I Got the Juice,” featuring Pharrell Williams.

60-, 30- and 15-second TVC ads, both in English and Spanish, are airing on streaming services and YouTube. The one-minute ad spot made its national debut on Oct. 17 during ESPN Monday Night Football's first-half highlights segment, and has since run on linear TV, digital long and short form, cinema and social media.

The ad was filmed in four locations across Atlanta and Boston, including a Target store in Cambridge, Massachusetts, that was also featured in the ad as the exterior shot of the Target store.

In addition to the ad, Target is also rolling out new and exclusive licensed merchandise across toys, home, apparel and beauty, such as pillows and pajamas. Among the exclusive product assortment is a “Black Panther: Wakanda Forever” royal sea leopard ship from Lego a well as collectibles from the Black Panther legacy collection POP! series from Funko. Ulta at Target shops are also stocking a special Wakanda Forever collection from Mac Cosmetics that is also available online via a dedicated web page within Target.com.

Online, all the themed Black Panther products and activities are promoted together via a decked-out brand shop within Target’s website, which launched on Oct. 2. One of those offerings is a QR code that links to an exclusive AR experience that enables users to view different Wakanda Forever toys, including Lego's royal sea leopard ship and multiple Hasbro action figures of characters from the film. Shoppers can also find the QR code on dedicated signs in stores in the toy department.

Meanwhile, Target is expanding its Disney at Target shop-in-shops to more than 200 total locations by the end of 2022. The in-store experience groups products across categories from brands like Disney, Marvel and Star Wars. 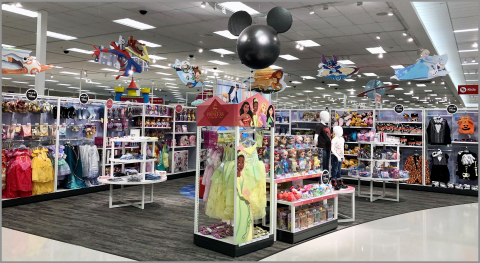