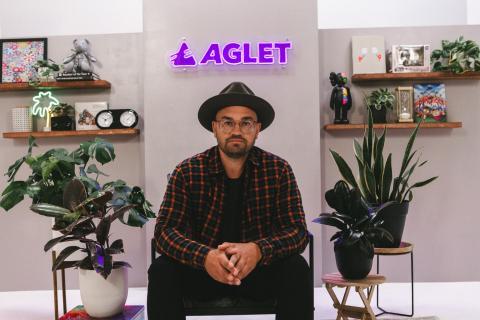 Ryan Mullins’ core vision is that the future internet is a fusion and convergence of the virtual and physical dimensions via location-based experiences and interactive media, powered by Web3 tools. He is currently the CEO and co-founder of Aglet, a location-based mobile app specialized in buying and selling virtual streetwear and sneakers. Prior to Aglet, Mullins worked as director of future trends at Adidas, where he helped conceptualize and lead creator economy, blockchain and innovation initiatives.

Mullins, who will participate in a panel discussion on the second day of the Path to Purchase Institute’s Future Forward conference this month alongside Wunderman Thompson editor Emily Safian-Demers and TikTok director of U.S. retail and global business solutions Matt Cleary, answered a few questions about emerging trends and the next era of commerce.

Future Forward will take place May 16-19 at the Sheraton Grand Chicago and will focus on demystifying the new consumer in a world forever changed. The content will look at how, where and why consumers shop, as well as the implications this has on brands and businesses — with tangible takeaways to enact change.

P2PIQ: What emerging trends are heralding the future of commerce?
Mullins: My thesis is that “gaming is eating the world.” It’s an obvious play on Marc Andreessen’s 2011 Wall Street Journal article, “Why Software is eating the world.” The thesis here isn’t the trivially true claim that gaming is more popular than ever; more money is spent on skins (AKA external visuals for characters that can be changed like clothing) and in-app purchases in game environments; gaming has become the cultural driver of trends and fashion; all this is obvious and true. Gaming is eating the world means that game mechanics are now baked into all experiences, whether virtual or real. Gaming has come off the screen and is now baked into the very fabric of our lives. Game design is the default method for how brands are designing experiences for their fandoms. Jon Palmer has written persuasively about this UX/UI shift.

For example, if you’re into fashion, like sneakers or streetwear, collectibles or handbags, then you know about “drops.” Basically, what’s happened is that you’re now playing your favorite brand. Whether they know it or not, brands have adopted game mechanics and leveraged them as impactful ways to engage their core audience. Competing against millions of people around the globe at 9 a.m. on a Saturday morning to cop Yeezy 700 wave runners, with a visible timer, entering the waiting room for the message that says, “You copped!” This is a game. The secondary marketplace of StockX or GOAT is a place where you can capitalize on the arbitrage and make a profit. This isn’t dissimilar to virtual economies within games like World of Warcraft or flipping Fortnite accounts. When these products become assets, then the financial game of pop culture begins. We’re in Andy Warhol’s world.

The bigger reason, though, and this will be developed below, is that game designers will be the commerce designers of the future. The dominant interface of the internet has been pages, feeds and timelines. However, we’re moving from pages to places; from websites to spaces. The future of the internet is spatial. Hence, “the metaverse” as virtual worlds are about an avatar’s movement within a designed environment. Augmented reality experiences are about a person’s physical movement in and around the world.

I think we’re on the cusp of massive changes in commerce because the core interface of the internet will change. Identity, payments, media, social, commerce and governance will change drastically as a result of this fundamental design change.

The cluster of concepts — metaverse, Web3, NFTs — fail to capture what I believe is actually a much bigger shift. That shift is a move away from the book metaphor that’s dominated our interface with the internet. The metaverse is a spatial shift, with Web3 functioning as tools for new business models to emerge and new governance mechanisms for how people socialise and mobilise. So, this means looking at Roblox less as a game or experience platform and more like the new browser experience.

P2PIQ: How is digital ownership shifting consumer habits and informing retail strategy?
Mullins: It’s been said that the original sin of the internet is the lack of a payments protocol at the base of the internet infrastructure. We know the context of the origins of the internet, and commercial engagement wasn’t at all on their minds. However, when we get to Berners-Lee and the Web, and later with the browser wars, we also didn’t have a payments protocol. As a result, the road was paved for outsourced business models (attention aggregation, banner ads, programmatic, etc.). The evolution of internet experiences is such that streaming services led to a market in which creators didn’t profit from their actual IP (internet protocol). If you’re a content creator or musician, unless you're Drake or Taylor Swift, you’re not making money from your videos or music directly. You’re making money from the peripherals around the IP (e.g., merch, tours, partnerships, ads, sponsorships, etc.).

The reason NFTs exploded had nothing to do with advancements in the protocol. It had everything to do with the pandemic making it nearly impossible for most culture leaders and creators to earn revenues from these peripherals. They couldn’t tour or sell merch on tour, and partnership opportunities shrank. Thus, the only way to monetize rabid fans hungry for connection to their favorite creators: NFTs. Now, you could directly monetize the IP you create. It’s started with digital art but it’s obvious that music is next, and we’ll start seeing books and other kinds of media follow.

The creator and ownership economy enables a rethink of business models which have the potential to be massive for independent creators to reach their communities more directly.

For retail in particular, I do think that the meaning of a “store” will change dramatically. I think it’s possible to leverage much of this mobilization to drive social experiences in physical meetups at stores. Especially for token holders. You saw some of this with Bored Ape Yacht Club, as well as some other social tokens that were released.

P2PIQ: Since the metaverse is a major buzzword currently that seems to have several definitions based on how individual people choose to use it, do you have a particular way you like to describe it?
Mullins: A couple weeks ago, I asked my 6-year-old, “What is the internet?,” and he told me “Netflix." Ask someone what electricity is, and maybe they point to their Tesla or a light bulb. If you ask someone, "what is the metaverse?" They might say Roblox or Decentraland.

"The internet" is not a singular thing. No one company built it. Rather it comprises quite a few components and the whole is greater than the sum of its parts: protocols, standards, hardware, servers, undersea cabling, people, satellite and fibre infrastructure, and local utility systems must all be in harmony before Netflix can exist and be enjoyed.

I don’t think the metaverse is only an interconnected multiverse of virtual worlds. That’s part of it, indeed. But, the missing piece here is a digital grid or layer on top of the physical world where online and offline connect properly. That’s why it’s more a theory of everything, and it’s why the opportunity is much bigger than what’s being discussed. When you look at Amazon, Microsoft and Tesla (the companies each worth more than $1 trillion) they’ve definitely made bets in gaming. However, they’re also trying to map reality.

The connection between the virtual layer and virtual world is what I view as the metaverse. That connection is enabled by new standards and protocols where data is passed from reality to virtual and from virtual to reality.

P2PIQ: How does Aglet meet the moment and bridge physical and digital consumption?
Mullins: Aglet is the first product of a company called Onlife. Again, not online or offline, but Onlife. So, bridging and harmonizing physical and digital is at the core of our mission. We elected to use location-based gameplay to connect people virtually to their real-world surroundings. As we believe the future of the internet is spatial, we’ve often wondered why no one has built additional commerce and social layers atop maps. Maps, for our team, is the way to fuse digital and physical. The development of our experience focuses on three different core features:

For us, “wallet” is an awful metaphor as the storage for these assets. We believe that social networks will form around asset collection, trading, buying and selling and that a “gallery” is a much better description of what’s going on here. These assets featured in your gallery aren’t only assets collected in Aglet. They can be any NFTs you’ve collected anywhere. It’s a social and livestream layer built around your assets.

P2PIQ: What business and retail models will emerge with the next era of digital engagement?
Mullins: My hope is that we’ll start seeing an explosion of innovation and new brand and product development, including new brands we’ve never heard of. It appears culture has fully embraced a retroism that’s deflating to say the least (e.g., constant references to the '80s and '90s). It’s pretty boring. I’m more interested in new brands and new companies that are pushing us forward instead of pushing us into the past. I hope that we’ll see a new design aesthetic for youth culture and brands, designers, creators and their companies and communities that lead the next surge. If what’s created is just another brand casino space for rent-seeking brands, then it’s a failure. I’d like to build my take on what a spatial internet platform looks like but we’re not the hero of this story. I’ll leave it up to others to decide what business and retail models will emerge. That said, I certainly have my ideas.